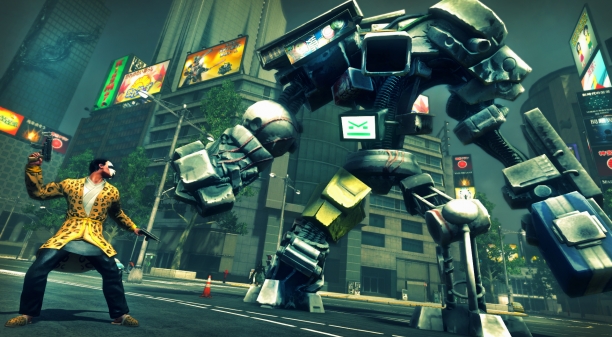 We invite you all to take part in this special occasion and enjoy a great event, huge bonuses and brand new content.

The Guardians of Gaia event returns, where massive Golems invade all the different areas of the game. This year the event offers some great new loot, rewards and an all new Golem in Tokyo! Take on this enormous and powerful new Tokyo Golem and earn unique rewards!

The anniversary celebrations last for two weeks, from the 3rd of July to the 17th of July, so log in now and take part!

From the 3rd of July and until 11th of July everyone can also enjoy these huge bonuses:

An all new mission pack is live! Enjoy the brand new Sidestories: Love & Loathing, which offers five new missions in the city of Tokyo, which was introduced in Issue #9. The pack contains:

Anyone who completes all five missions in  Sidestories: Love & Loathing will receive the Cracked Noh mask and a Deep Mystery Box as rewards! (This Deep Mystery Box can only be gotten once on each account.)

The five new missions are an excellent source for the new Sequins of Sunrise tokens in Tokyo, which you can use to upgrade your AEGIS Weapon Controllers. Doing these missions while the anniversary bonus of 50% more research XP is active, is a great way to improve your AEGIS skill!

Please note that you need to have Issue #9: The Black Signal to be able to purchase Sidestories: Love & Loathing and to do the new missions in Tokyo. 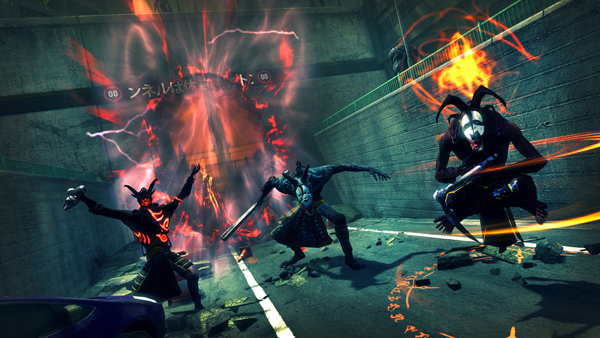 Issue #8: The Venetian Agenda is Live! 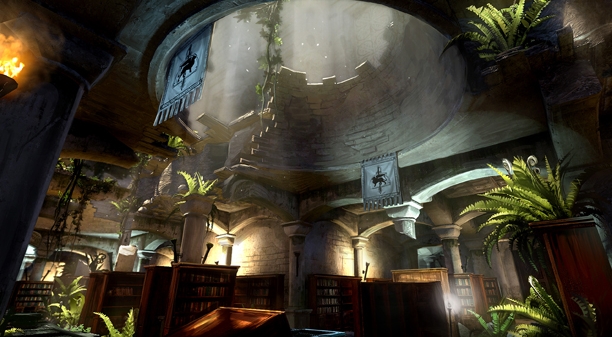 The latest update to The Secret World is just out. Members get three days of early access and can buy Issue #8: The Venetian Agenda in the Item Shop and jump into the action straight away! Non-members can get Issue #8 on Sunday the 10th of November.

Issue #8 brings two brand new features to The Secret World, the Scenario System and the Augment System. Scenarios are a completely fresh type of content which offer virtual training in the headquarters of The Council of Venice. Augments give a rich new layer to character development, by letting you enhance your Active Abilities with powerful Augments, giving you more tactical choices than ever before!

Issue #8: The Venetian Agenda can be bought in the Item Shop like previous Issues, but a part of this update is available to everyone for free!

Anyone can enter Venice through Agartha and play the Normal and Elite version of the Seek and Preserve Scenario taking place in Hotel Wahid. To get access to the Nightmare version of this Scenario and the rest of the Scenarios you need to buy Issue #8 in the Item Shop or the Scenarios themselves as individual upgrades.

Check out the exclusive preview video of Issue #8 narrated by Game Director Joel Bylos, to get a sneak peek at all that is awaiting you in this fresh update!

Read more about Issue #8: The Venetian Agenda below the Issue cover. 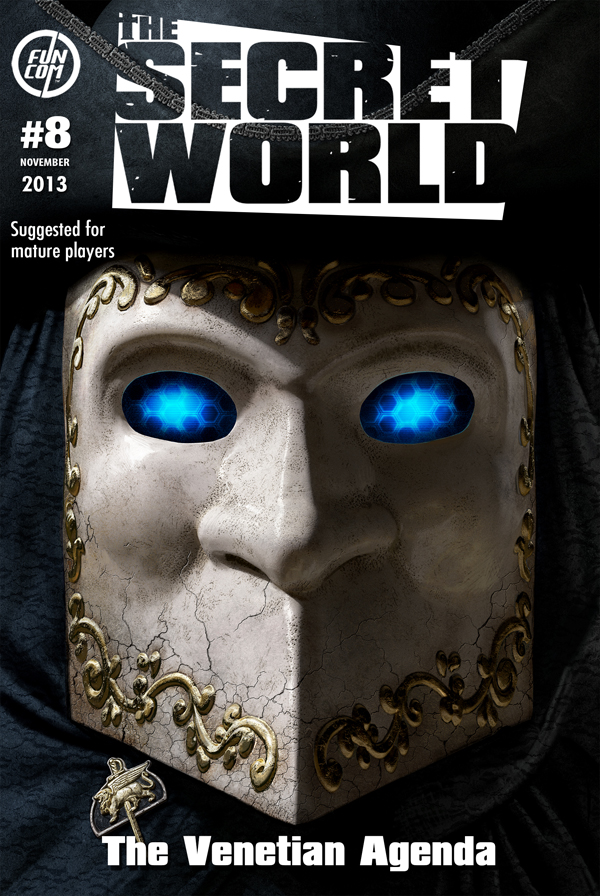 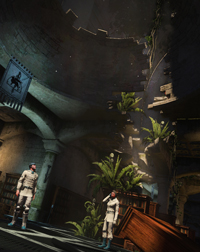 Go through Agartha and head on over to the Venice entrance to check out an all new part of The Council of Venice’s Headquarters. Take part in the virtual training Scenarios which will test you to the max. There are three different Scenarios in Issue #8, each of them has three different difficulties and each of them can be done either solo, duo or as a team.

The Scenarios offer brutal challenges full of random encounters and events. Normal and Elite modes are hard enough, but will you dare challenge the diabolic Nightmare difficulty? 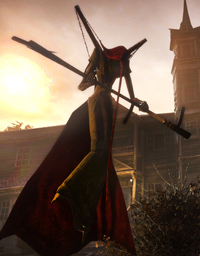 By defeating bosses and completing the Scenarios you get rewarded with powerful Augments. The all new Augment System lets you fine tune your Abilities by giving them additional effects.

Play a lot of Scenarios and earn Augments which boost your damage, your healing, your tanking or the combined power of your entire team! With Augments you get even more choices on how to improve your character, and more tactical choices to make you more powerful than ever before!

Celebrate Halloween in The Secret World 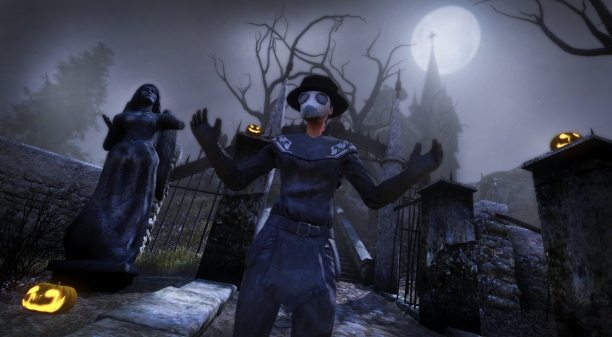 Halloween is a very special occasion in The Secret World, and this year we have a unique treat for you! You can enjoy ten new Item Missions with ten exclusive scary stories written for this occasion alone.  You will find these spread throughout New England, as they are built on local urban legends and told by the Solomon Islanders themselves.

Complete all the new missions and gather up all the stories and you will get a special reward from Danny Dufresne and the complete set of stories bound into an in-game book, which you can read through at any time!

I despise the trope of the unreliable narrator, so you can imagine my self-loathing, tonight, as I bleed black upon the blank page. I was full of with self-loathing that night too. I was a writer, barely at the start of my career, and I’d run out of stories.

Never mind whether I found him, or he found me. Never mind the ritualistic particulars — whether I waited at a cross roads under a harvest moon or drew a chalk circle or invoked his name nine times before a dark mirror — whether I sacrificed a cat, swallowed a leech ballooning on virgin blood, or answered an odd ad in the Personals. Pick your cliché and suckle on it…

But that is of course not all. The Cat God is making a return for this year’s Halloween, so get ready for a harrowing chain of Missions where you get to see Stonehenge in its ancient form.

We are also introducing plenty of new and exclusive Halloween items this year, some of which can be gotten as rewards and loot and others in the Item Shop. Does dressing up as a Plague Doctor for Halloween this year sound tempting?

The Halloween events start today and will last for two weeks, until the 11th of November. 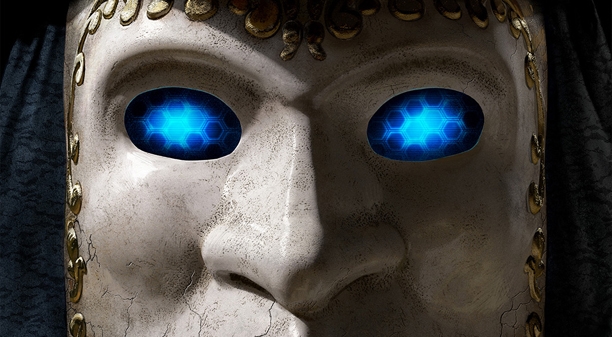 Issue #8: The Venetian Agenda is nearing completion. This update contains two brand new and important game features – the Scenario and Augment Systems. Today we are going into detail about the Augment System and talk in depth on how everything works.

At the bottom of this article you can also enjoy the all new cover for Issue #8!

The Secret World’s game system has one core principle: You can learn everything and choose exactly what you bring to each fight yourself. Giving the players freedom and choice is always most prominently on our mind.

The new Augment System coming with Issue #8: The Venetian Agenda follows this principle to the letter.

The Secret World already has an immensely deep character development system, with more than five hundred Abilities to learn and choose from. The continuous expansion of the Auxiliary Weapons System has added even more choice and depth to the game since launch, and now yet another layer gets added to this rich cake of game systems.

This new layer is made for experienced players who have already acquired most Skills and enough Abilities to be effective in many situations. It gives them a new opportunity to customize their characters, try out more tactics and acquire more power!

As the players learn more and more about wielding Anima powers they also learn new ways to fine tune these Abilities. The better the resonance with the Anima they can create, the more powerful their Abilities can become. This is what Augments are – tuning forks which lets the players channel the power of Gaia better than ever.

The basics of Augments

The Augment System offers four brand new Skill lines and a total of forty Augments which each has five different Quality Levels. Any player can learn any, and potentially all, of these Augments if he is diligent enough.

There are four main groups of Augments: Damage, Support, Healing and Survivability. Each group consists of ten unique Augments. These ten are divided into different degrees of rarity: One Green, four Blue, four Purple and the rarest is the one Yellow.

The new Augments have gotten their very own Augment Wheel, where all of them can be studied and progress monitored.

You use Augments by attaching them to the active Abilities on your Abilities bar. Each Augment group has a color and each active Ability uses this color coding to show which types of Augments can be attached to it.

For example: The Assault Rifle builder Ability Suppressing Fire is a pure damage ability and therefore can only have damage Augments attached to it, while the Blade builder Blade Torrent can have both Damage and Survivability Augments. 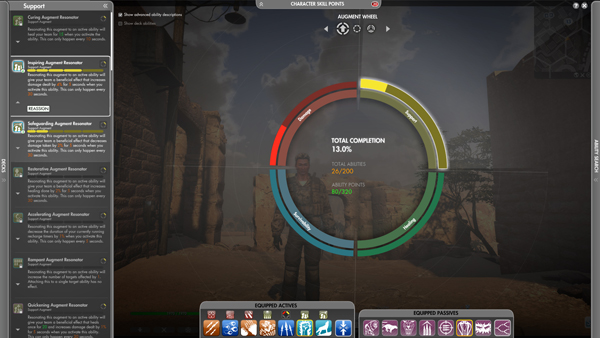 The bonuses you get

The power of each Augment depends on several factors, such as its rarity, what QL it has and what Ability it is attached to.

Damage Augments do things like increase the chance of Critical and Penetrating hits, increase Attack Rating and Hit Rating or in their rarest form give a significant damage increase. Survivability Augments can boost Health and protections or Block, Defense and Evade Rating, and also increase Hate generation or give a handy self heal based on total Health.

Support Augments can increase team healing or damage and even reduce the amount of damage taken for the whole team. The most helpful Support Augments may still be those which reduce the recharge cooldown on either your own Abilities or those of the entire team!

Healing Augments give you a higher Heal rating, buff Heal over Time effects, Barriers or Leeching Abilities. They also increase the chance to do Critical Heals or Critical Power. The rarest Healing Augment gives the Ability it is attached to a big boost in the amount it heals per use.

Most Augments only augment the Ability they are attached to, and since the diligent player quite quickly will have many Augments to choose from, which Augment he attaches to which Ability is critical.

These are the choices which add another layer of depth to The Secret World’s character development system. Knowing which Augments to use on which Ability and for which situation is the key. Perhaps some added self healing might be the way to go for soloing and PvP? Perhaps going all out with Damage Augments will be the way to go in Dungeons or perhaps buffing the entire team with Support Augments is even smarter?

Augments are acquired as loot in the game, but not in their finished state. What you get from defeating bosses in Scenarios are unattuned Augments. Only the least rare (green) Augments can be used straight away when you loot them.

The rest of the Augments must be crafted together with both Pure resources and Runes to attune them. When you have a finished Augment you must also posses enough Ability Points to learn it and have the appropriate Augment Skill.

As you learn the new Augment power the Augment is removed from your inventory as an item and instead becomes active in the new Augment Wheel. The required number of Ability Points is consumed by this process.

To increase the QL of your Augments you just repeat this process. The only difference is that you need to combine two finished Augments to get to QL 2, three to get to QL 3 and so on. The number of Ability Points required increases for each QL of the Augment and you of course need to have invested more in your Augment Skills to use them.

To learn more and more Augments you need to get your hands on the right loot, gather crafting resources and save up both Ability Points and Skill Points. Then you can build the Augments you want, consume them in your inventory with a right click and finally choose them in the Augment Wheel and attach them to an active Ability.

So look forward to Issue #8 people! Soon you will get the chance to fine tune your Abilities with Augments, get tons of new tactical choices and increase the power of your characters to new heights!

This site uses Akismet to reduce spam. Learn how your comment data is processed.